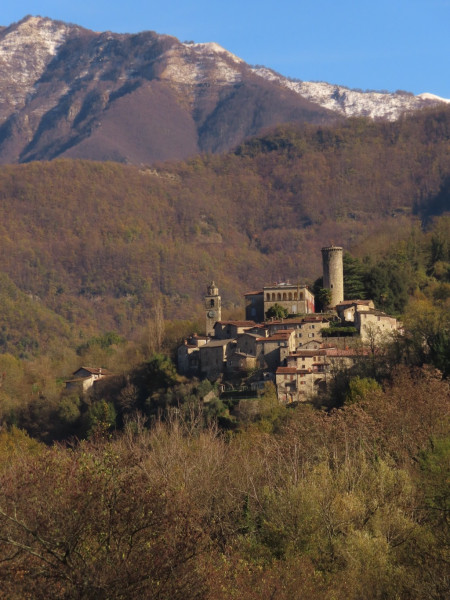 The Bagnonese territory has been populated since Stone Age, being the pre-historical settlements half way on the hills. The early presence of man in this area is well proved by an anthropomorphic menhir found near the village of Treschietto and now displayed in the Pontremoli Museum.

Historically speaking, Bagnone was first mentioned by the German Emperor Otto I in 963. The name Bagnone is, in fact, found in a list of villages, parishes and castles that were entrusted by the Emperor to the Earl-Bishop of Luni in this very year. In this case, Bagnone was meant to be the castle with surrounding houses set on a hill to the left of the Bagnone river. This castle with its circular tower was part of a network of castles visually linked to one another (Malgrate, Groppoli, Mulazzo), used to control the valley bottom roads leading to Rome (the famous “Via Francigena”). The village called Bagnone, as we know it nowadays, developed later on from a hamlet called “Gutula”, during early Middle Ages. In fact Gutula is first mentioned in another document, that is to say a Papal bull, dating back to 1149.

During Middle Ages, Bagnone as a whole (the castle and the village below) were under the feudal rule of the Malaspina family. From the seconf half of the 15th century it was part of the Republic of Florence and then of the Grand Duchy of Tuscany, until the Napoleonic period. After the 1815 Restauration, Bagnone followed the evolution of other parts of Italy, from smaller states (Grand Duchy of Toscana, Duchy of Parma) to the unitarian Kingdom of Italy in 1859, being incorporated in the Province of Massa Carrara.